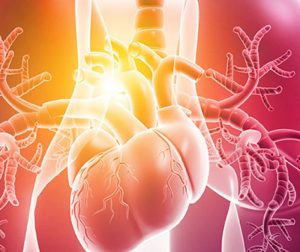 Maynard Eilers doesn’t shy away from talking about his experience at St. Vincent’s. Ask his thoughts and he won’t hesitate to tell you about the miracle workers adorned with employee badges roaming the halls of our health system.

Of course, if anyone were to know a miracle when they see it, it would be Maynard. In December 2013, his wife rushed him to the emergency room at St. Vincent’s Riverside when he woke up paralyzed from the waist down.

Dr. Lee, a cardiothoracic surgeon at St. Vincent’s, informed Maynard that he was experiencing an aortic dissection, a condition in which the inner layer of the aorta—the large blood vessel branching off the heart—tears. That tear allows blood to surge through, causing the inner and middle layers of the aorta to separate or dissect.

Aortic dissection is a rare condition that affects fewer than 200,000 people in the US each year. That it’s so rare is a blessing in itself; the condition doesn’t leave many survivors in its wake. Roughly 20% of patients die before even reaching the hospital. 80% of patients who don’t receive treatment within two weeks succumb to the disease.

So you can understand why Maynard’s prognosis was delivered to him rather bluntly. You either go into surgery right now, or you likely won’t survive the day.

Dr. Lee and the OR team worked for more than six hours to repair Maynard’s heart. The procedure was long and fraught with challenges. Maynard’s heart was in such dire condition, it tried giving out on him multiple times throughout the arduous procedure. It took everything in Dr. Lee and the OR team’s power to keep his condition from claiming his life.

It was a tough battle, but they succeeded. Several hours after he entered the operating room, Maynard emerged, alive. Now that his heart had been surgically repaired, it was time to embark on the long road to recovery.

Maynard was transferred to the open-heart recovery unit at St. Vincent’s Riverside, where he would begin his years-long recovery process. Much like his surgery, though, his recovery presented its own set of challenges.

With a procedure this major, there will always be complications that naturally arise. During his recovery, Maynard battled his way through unforeseen complications like renal failure and fluid buildup. But thanks to the unyielding efforts of the open-heart recovery team, Maynard survived everything his body threw his way.

Considering everything Maynard experienced during his recovery, it’s easy to understand when Dr. Lee explains why his story is an inspiration to the open-heart team.

“This man faced hurdle after hurdle, and at any time his body could have given out,” Dr. Lee said. “But the open-heart team never faltered, because if this man wasn’t going to give up, then how could they?”

Talk to Maynard today about his experience with the heart team and his cracking voice and watery eyes will tell you all you need to know. He doesn’t attempt to hide his emotions as he chokes up describing the source of his spiritual strength.

“My wife is the reason I’m around today. She would do anything that came up,” Maynard says, his voice shaking with emotion. “She would take me to every doctor appointment, she’d manage my medicine. She is why I’m still here.”

A little more than two years after his surgery, Maynard is in the late stages of recovery. Now that he’s walking with a cane or walker to help counter his balance issues, Maynard and his wife are getting back to their normal lives. They travel, they read, and they play Scrabble. They couldn’t ask for more.

His condition may have been uncomfortably close to fatal and his treatment and recovery may have been strenuous, but Maynard’s morale never wavered.

“My spirits were never affected at all—I was either too sick to realize or too bull-headed to give in to it. But I don’t think I’ve had one pessimistic moment about my situation during the last two years. You have to have the attitude to fight through it, and I’ve pretty much always been a fighter.”

In December 2015, the open-heart recovery team received a handwritten letter from Maynard. He wanted to express his gratitude to the team for ensuring he’s alive today to even write such a letter. 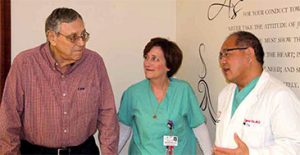 Maynard, his wife, and members of the Open-Heart Recovery Team.

“If Dr. Lee and all the people in open-heart recovery hadn’t taken such good care of me, I wouldn’t be around to watch my grandchildren grow up,” Maynard said. “The open-heart team and Dr. Lee, they are my miracle.”